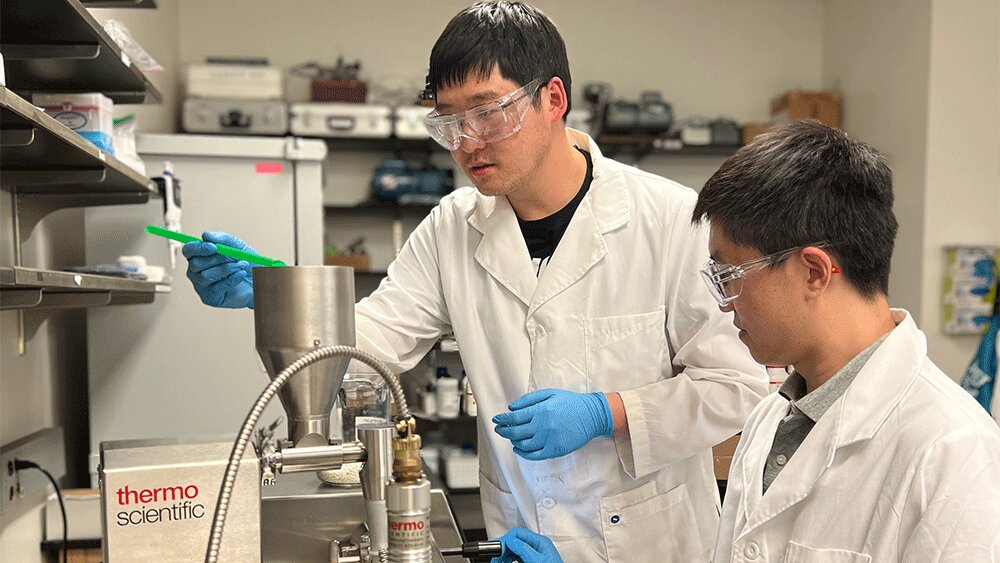 Dr. Wang’s team was selected for this grant. Texas A&M University is the leading organization with Dr. Wang as the Principal Investigator. The team is comprised of: 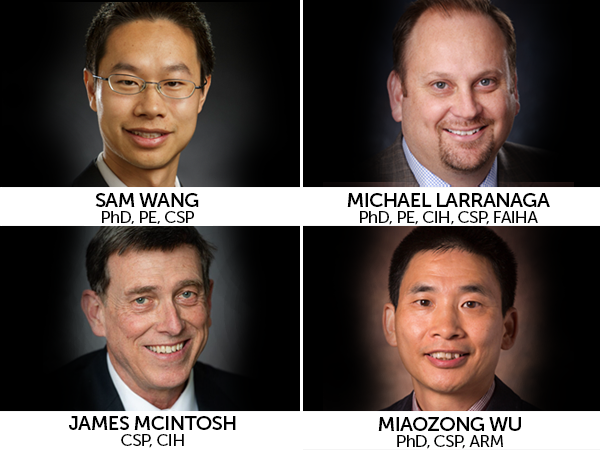 These emulsifiers function by assembling as solid particles at the oil-water interface.

KEY CONCEPTS
• Conventional emulsions are not sufficiently stabilized with surfactants over the long term.
• Thin and nanometer-wide planar carbon structures, known as graphene quantum dots, have been developed that demonstrate superior emulsion stability to surfactants in deionized water and in the presence of high levels of electrolytes.
• The zwitterionic nature of the graphene quantum dots allows the emulsifier to stabilize emulsions over a wide pH range from 3 to 12. 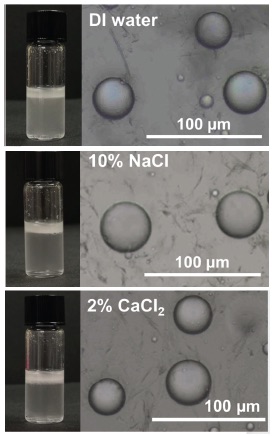 Congratulations to all students graduating this Spring from our group.

Ruiqing Shen will join the Department of Mechanical and Industrial Engineering at Marshall University as Assistant Professor this Fall semester. Great to see next generation of the Wang academic family. Wish you the best in your academic career!

Pallavi Kumari will join Intel as Process Engineer. Seungho Lee will work at POSCO in South Korea and Bryan M. Wan working for Cenovus Energy in Canada. Best wishes to all of you! Congratulations on three recent graduated PhD students. Wish you all the best in the next chapter of your life:

Congratulations on three PhD students on their successful passing of preliminary exams: Ryan Shen, Rong Ma and Trent Parker. Wish you all having successful final defenses soon next year!

Two PhD students from our group have been awarded graduate fellowships: Ruiqing Shen and Trent Parker. Congratulations to them. An article written by Dr. Qingsheng Wang, associate professor and director of the safety engineering program in the Artie McFerrin Department of Chemical Engineering at Texas A&M University, was selected as an American Chemical Society (ACS) Editors’ Choice. Graduate students Zeren Jiao, Pingfan Hu and Hongfei Xu from the Wang Group are co-authors of the paper. In the article, “Machine Learning and Deep Learning in Chemical Health and Safety: A Systematic Review of Techniques and Applications,” which originally appeared in the journal ACS Chemical Health & Safety, Wang and his team examined the current literature surrounding machine learning and deep learning in the context of safety engineering.

ACS Editors’ Choice is a service designed to feature scientific articles of broad public interest and to make this material widely accessible to both the scholarly community and general public. This is an honor given to only one article from the entire ACS portfolio each day of the year.

While the COVID-19 pandemic continues, there is a need to look ahead for innovate new ways to make public buildings safer for both visitors and employees.

Dr. Zheng O’Neill of the J. Mike Walker ’66 Department of Mechanical Engineering and a team of Texas A&M University researchers are seeking to develop a smart ventilation control system with grant support from the National Science Foundation (NSF). O’Neill, who serves as associate professor and J. Mike Walker ’66 Faculty Fellow II in the department, is partnering on the project with Dr. Qingsheng Wang, associate professor in the Artie McFerrin Department of Chemical Engineering.

The goal of the project is to investigate the viability of a smart ventilation control system that could operate with a normal mode and an emergency “pandemic mode,” as needed, for common public buildings such as offices, classrooms and retail stores. With proper measures, the built environment could help minimize the potential for COVID-19 infection.

Before Dr. Qingsheng Wang became an associate professor of chemical engineering at the Mary Kay O’Connor Process Safety Center at Texas A&M University, he was a doctoral student working there. Wang answered a few questions about his journey from Texas A&M and back and how this experience has shaped him into the researcher and mentor he is today.

Q: Can you tell us a little bit about what brought you to Texas A&M University as a student?

A: Dr. F. Albert Cotton brought me to Texas A&M University. It was 2005, and I had just completed my undergraduate and master’s studies in chemistry from Zhejiang University in China. I wanted to pursue a Ph.D., and at that time, Dr. Cotton was a distinguished professor in the Department of Chemistry at Texas A&M. He was a very famous chemist with his name appearing in a few textbooks. I really wanted to join his lab. He was studying the chemistry behind metal-metal bonds — an area of research I was interested in. So I applied to the university’s graduate program in chemistry, and I got in.

Q: Cotton was part of the chemistry department, and you spent the majority of your graduate studies at Texas A&M working as a researcher for the Mary Kay O’Connor Process Safety Center in the College of Engineering. How did you wind up there?

A: When I was in my second year of graduate school, Dr. Cotton passed away, and so I was on the lookout for a new lab for my doctoral studies. I did speak to many professors in that regard, but the conversations I had with Dr. Sam Mannan really stood out. He was the director of the Mary Kay O’Connor Process Safety Center, which is a part of the Department of Chemical Engineering. I was fascinated by the kind of research they did at the center, particularly on the reaction mechanisms that trigger chemical explosions. I could apply a lot of my knowledge in quantum chemistry to study how volatile chemicals break down and eventually explode. Also, I had the opportunity to work on projects that were industry-focused, which made sense since most incidents of chemical explosions happen in industries.

A: Oh yes, they happen pretty often and some of them are really big. For example, in 1947 there was an incident in Texas City where ammonium nitrate, which is a common fertilizer, exploded because it accidentally caught on fire. In 2013 in West, Texas, the same chemical exploded, and just last year, the Chemical Safety Board investigated a few incidents. In fact, the Mary Kay O’Connor Process Safety Center was established to educate engineers to identify and prevent potential fires and explosions before situations become irreversibly dangerous.

Q: Did you continue studying fires and explosions after graduate school?

A: Yes, I wanted to remain in academia and do more research on that topic. Oklahoma State University had an opening in the Department of Fire Protection and Safety Engineering. I applied, interviewed and got an offer to join as an assistant professor almost immediately after. In my lab, I studied mostly fire safety and the combustion dynamics behind fires caused by burning different materials. I was very fortunate that my training in chemistry and chemical engineering at Texas A&M uniquely positioned me to study this topic.

Q: In 2019, you returned to Texas A&M after spending eight and a half years at Oklahoma State University. What made you come back?

A: My Ph.D. advisor, Dr. Mannan. I was doing really well at Oklahoma State; I was an endowed professor and was supervising several Ph.D. and master’s students. Dr. Mannan called me one day and said that the Mary Kay O’Connor Process Safety Center was expanding, and there were a few faculty positions that were available. He said that the number of Ph.D. students at the center had increased a lot. He wanted my help, and I wanted to help. But I also knew that coming back gave me the opportunity to give back to the institution I learned so much from. It was win-win.

Q: What is it like being on the faculty at Texas A&M?

A: My journey has come full circle. Unlike when I was a student, I now see the organization from a different vantage point. I hope to bring all my experience in leadership and research to manage the safety engineering academic program. I also now collaborate with several senior professors from other departments to enhance my research.

Q: What career advice do you give your students?

A: I encourage all my students to have an open mind about their career pursuits. I chose to be in academia because I really enjoy teaching and research. But the wonderful aspect about being at the Mary Kay O’Connor Process Safety Center is that you also get to work on industry-related projects. So, I highly recommend that my students do at least one internship in industry before they make up their minds about the direction of their careers. But if they enjoy research more and want to stay in academia, they have my full support as well.